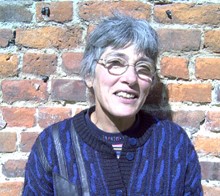 “When few were listening to the cause that the history of black people in the country was as important as any other, Marika continued to fly that flag. And when that flag was at risk, she and her colleagues founded the Black and Asian Studies Association. We now accept that flag with honour and vow to work with individuals and organisations to make the rich and significant Black and Asian history available 24 hours a day 7 days a week. And we honour Marika with the deepest possible thanks for the work she has championed from the early 70’s to the present day”

In 1948 with that remained of her Jewish family, Budapest-born Marika Sherwood emigrated to Sydney, Australia. Married and divorced, with a baby son she moved to a job in New Guinea. Then back to Australia to attend university part-time. Then to London, where she taught in schools, then travelled for a year, teaching English in Sicily for 6 months. Back in the UK she trained as a counsellor and worked with students at a London polytechnic.

She then began researching aspects of the history of Black peoples in the UK. Offered work at City College in Harlem, she worked in New York for five years, then returned to the UK to continue researching. She taught part-time courses at Open University and Birkbeck College, University of London, before being appointed as an Honorary Research Fellow at the Institute of Commonwealth Studies, (part of the School of Advances Studies, University of London) by Professor Shula Marks.

In 1991 Marika Sherwood was one of the founders of the Black and Asian Studies Association, and edited the BASA Newsletter until 2007; she also organised annual conferences and monthly seminars at the Institute.

Her most recent articles are: ’The All Colonial Peoples Conferences in Britain, 1945’, Lucas – Leeds African Studies Bulletin, #79, 2017-8, pp.113-124 (this is an abbreviated version; the full article is accessible on http://lucas.leeds.ac.uk/article/the-all-colonial-peoples-conferences-in-britain-1945; 'The Quest in the United Kingdom for African Unity 1945-48', Contemporary Journal of African Studies, 5/1, 2018 also on https://www.ajol.info/index.php/contjas/article/view/170905; 'An information "black hole": World War I in Africa', László Z. Karvalics (ed), Information History of the First World War (UNESCO /L'Harmattan Publishing, 2016.

Her next book, on Nkrumah, the campaigns for African unity in the UK 1945-48 and the beginning of the Cold War in the Gold Coast will be published by Pluto Press in 2019.